The Purpose of the Third Column in The Parking Lot 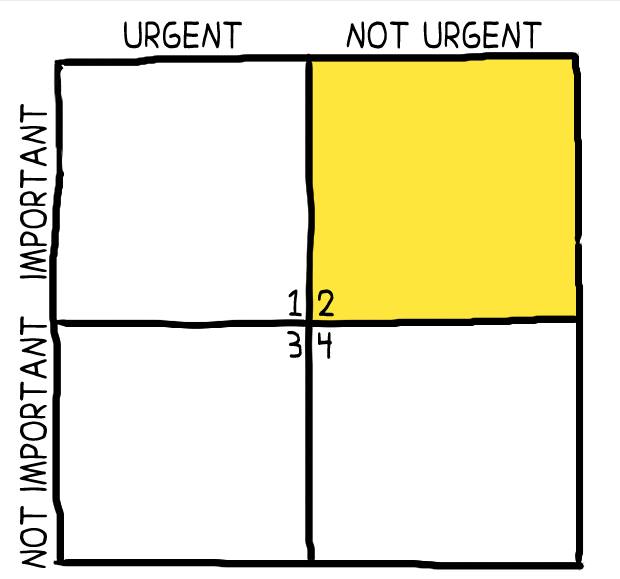 In a well-run Parking Lot doc, there are three columns that a topic is scored against.

I already talked about the first two columns in a previous post (https://tinyurl.com/t4m5emu), so I’m going to spend my time in this post talking about why “# of Months” is important.

Steven Covey is famous for his invention of The Four Quadrants (See Image). The Four Quadrants’ idea is that all the work we do can be put into one of the four quadrants based on how important something is and how urgently it needs to be addressed. Steven argues that most people spend way too much time in Quadrants 1, 3, and 4 even though the really valuable work is done in Quadrant 2. The work in Quadrant 2 isn’t urgent; it doesn’t ever need to be done right now, so often it’s pushed off until later. The problem is that “later” never comes.

How this shows up in Forum is that someone will mention in the first month that they don’t have a good relationship with their sister, but they rate the issue very low in terms of importance and urgency. Then in the next month, they mention their sister again but again rate it low. Rinse and repeat for the third, fourth, and fifth month.

If the Parking Lot only had the first two columns, the person’s issue with their sister would never get addressed. Only the fires would be noticed.

Even if someone keeps giving a low rating to the importance and urgency of a topic, by the third or fourth month, the overall score for that topic will be so high, it will end up being one of their highest-rated topics even though it’s not a fire in the kitchen.

Through the process of using the third column, we can effectively unearth the topics that fall into Steven Covey’s coveted Quadrant 2.